Jack loves a bargain. And he loves sheds. When he buys suspiciously cheap second-hand parts online to build his very own dream shed, he and long-suffering wife Helen find they’ve got more than they bargained for: a killer shed with an appetite for blood. As the body count rises, and the shed’s ferocious appetite grows, Jack is faced with a horrifying dilemma. A comedy horror about a man’s twisted love for his shed… that eats people.

Blood Shed is a dark and twisted but laugh out loud comedy, with a Creepshow-style look and sound, synthesizer music, LOTS of Evil Dead-style blood, and comic book panels. It’s a love letter to the 80s horror anthology style, while telling a bizarre new tale with a unique monster.

The team need to raise £10K to make this beautiful nightmare a reality, with a Kickstarter campaign live from 27th February – 27th March 2017. But they can’t do it without you! There are perks including signed goodies, exclusive extras and downloads, set visits, screening tickets, props, Executive Producer credits, writing workshops, script feedback, and even a piece of the shed! 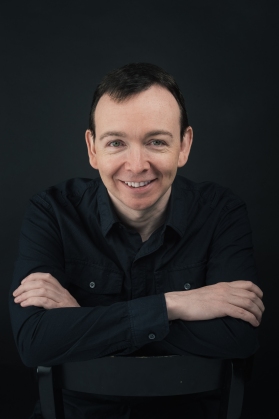 James Moran, co-writer and director, will already be familiar to many fans of the horror and comedy genre through his writing on the movies Severance, Cockneys vs Zombies and Tower Block, and internationally acclaimed TV shows such as Doctor Who, Torchwood, Primeval and Spooks. His other work includes 5-time Streamy Award nominated web series Girl Number 9, and several short films which he wrote and directed, including the award-winning hit Crazy for You (Best Horror/Sci-Fi, Crystal Palace International Film Festival), starring Arthur Darvill and Hannah Tointon, which screened at huge festivals across the globe and is now part of an anthology feature film. The team’s latest hit web series, Mina Murray’s Journal won the Best Screenplay award at Dublin Web Fest 2016, and will soon screen at HollyWeb in Los Angeles.

Moran says, “I’ve always loved 80s horror, and I’m really excited to unleash our evil beast. For years, we’ve seen people getting killed in or near cabins and outhouses, but we’ve never seen a shed itself actually doing the killing – until now!”

Cat Davies, co-writer and producer of the film, has worked professionally in production since 2005 at the BBC, ITV and as a publishing executive at BBC Worldwide managing the release of some of the UK’s biggest comedy titles. Cat is an expert in making the most of every penny and managing productions end-to-end. Cat is also an award-winning filmmaker, with her last short Connie starring Catrin Stewart, playing the international festival circuit and currently nominated for a prestigious iHorror award in the US. Cat is co-founder of Moranic Productions, with James.

Davies says, “we are desperate to bring this unique tale to life to delight horror, comedy and classic monster fans. We have a great team behind the project, and a united passion for the styles that influenced the script and visuals. We really need your help to make this happen and shoot the film in late April. We cannot wait to share Blood Shed with the world.”

Amazing cast and crew to be announced throughout the month-long campaign!

For more information head to: